More specifically, the Onyx is Peugeot’s mad-looking concept from the Paris Motor Show last year, and you may well have seen it on last Sunday’s Top Gear. It uses some truly bonkers materials: stuff like crushed newspaper for the dashboard, and felt for the seats. And all that shiny bodywork that looks like copper is just that – hand-beaten copper that’s an absolute nightmare to keep clean.

But there’s a massive difference with this particular concept car and any other – it actually works. And we’re the only website in the world to drive it.

Nope, ‘works’ as in it will do well over 100mph. ‘Works’ as in Peugeot are off to the Nogaro track later this month to try and set a (fast) lap time. If it had number plates, there’s no reason why we couldn’t drive out of this test track and down the road.

This is a concept car with the 600bhp, 3.7-litre V8 diesel engine taken straight out of the 908 Le Mans car. So power isn’t something it struggles with, especially when you realise it’s got a lightweight carbon-fibre chassis. Even with all the copper bodywork, the car still only weighs 1,100kg. So the power-to-weight ratio is 545bhp/tonne – slightly more than the ‘normal’ Bugatti Veyron.

As such, it shouldn’t come as much of a shock to discover that this is a seriously fast concept car. Even when we’re being careful with it – it is worth over £1,000,000 after all – it’s clear that it will reach ridiculous speeds.

There’s a definite sweet spot in the power delivery – between 3-4,000rpm – and when you’re in that, there is no power lag. Instant boost.

And despite being a diesel, it doesn’t feel like a lazy engine. Unlike most concept cars, the Onyx is not a fan of doing less than 50mph. Below that, it clunks along, chuntering and unhappy at not being used properly.

The engine is helped by the paddle-shift, sequential gearbox. This is one of the best-resolved parts of the car because it feels like the proper racing ‘box that it actually is. Upshifts are smooth, downshifts clack through the ratios with a speed and ferocity that’s exactly in keeping with how wild the Onyx looks.

Corners are easy. The steering is reactive so it’s not scary to drive at faster speeds, but I would prefer a bit more lock. Hairpins would not be easy in this car. Oh, and power steering would also be handy. The 908 wheel is so heavy it feels like it’s been set up for someone with forearms like the Hulk.

The biggest surprise of the day came from the ride quality. Now I know that French cars are meant to be comfortable but come on – the Onyx has got 20-inch wheels and ultra low-profile tyres. Plus, it looks like it’ll have all the suspension compliance of a slab of granite. But no – the Onyx was comfy and surprisingly smooth. It felt like the springs and dampers were well set-up, like someone had actually crafted them, and knew that the Onyx would need to ride as well as look good.

So should I be popping down to my Peugeot dealer to buy one?

Did you not read the price? No, sorry, this really is just a concept car, with no plans to build anything remotely similar. A pity… 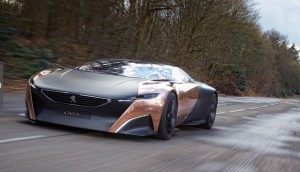 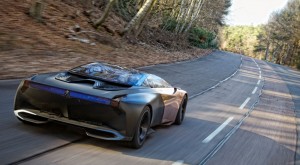 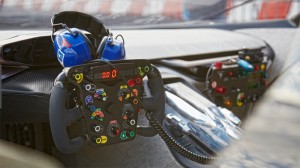 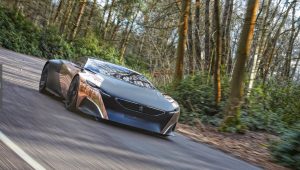