Office politics could limit a legend

The Dodge Viper ACR managed to set twoproduction lap records at the Nürburgring Nordschleife and a new report is indicating the next-generation model is due in 2014.

According to Motor Trend’s sources, the next super snake will have an aerodynamic body kit with a front spoiler and a massive rear wing. We can also expect a reduced ride height and a sport-tuned suspension with adjustable dampers, stiffer springs and beefier anti-roll bars. The car is also slated to feature high-performance brakes, bespoke Pirelli tires and a multitude of weight saving measures.

Interestingly, the magazine is reporting that office politics could determine if the ACR gets a power boost. SRT CEO Ralph Gilles has previously suggested the Viper wasn’t allowed to exceed the power-to-weight ratio of the Ferrari F12 Berlinetta so they matched it at 5.2 pounds per horsepower. Sources have hinted the Viper’s 8.4-liter V10 engine could produce more power than the F12’s 6.2-liter (6262cc) V12 which develops 730 bhp (544 kW). Ferrari, as you can imagine, isn’t too happy about this possibility so it seems like the ACR could be hamstrung by their Italian counterparts. 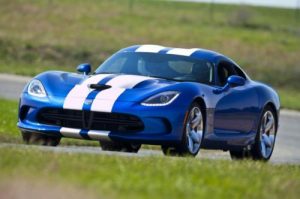