McLaren have today released the final piece of the puzzle for the production McLaren P1, due to be unveiled at next week’s Geneva Motor Show 2013. The biggest motor show in the world will welcome one of the most anticipated hypercars in the world. Having released everything but the performance statistics, today is the day we learn exactly how fast the McLaren P1 will be able to go!

A number of tech features make the McLaren P1 a very fast car. Cutting straight to the figures, the McLaren P1 will travel from zero to 100km/h in less than 3 seconds, zero to 200km/h in under 7 seconds, and zero to 300km/h in no more than 17 seconds. This is thanks, in part to the Instant Power Assist System (IPAS) which is essentially KERS, for road cars. Putting the 300km/h statistic into perspective, this is 11 seconds faster than the legendary McLaren F1 road car. Top speed is electronically limited to 350km/h.

The production version of the McLaren P1 doesn’t differ from the concept version we saw in Paris, except for the new LTR ducts fitted ahead of each of the front wheels to further aid cooling and optimise downforce. Future McLaren P1 owners loved the original concept and the feedback pointed to the fact that they wanted to see the concept unchanged.

To retain the feeling of uniqueness, only 375 McLaren P1′s will ever hit the roads each with a price tag for £866,000. For this, owners will get a car ready for both the race track and the road. The P1 comes standard with a comprehensive specification list so the only options customers will be able to spec are through McLaren Special Operations, and for fitted luggage.

As we have already revealed, the McLaren P1 will use a mid-mounted 3.8-litre twin-turbo V8 petrol engine fitted with two turbochargers and an electric motor. Together, this produces 916ps (903bhp) and a maximum torque figure of 900Nm. The petrol engine alone produces 737ps (727bhp) at 7,500rpm, and 720Nm of torque from 4,000rpm with the electric motor supplementing 179ps (176bhp) and 260Nm of torque. The power is channelled through the dual-clutch seven-speed gearbox to drive the rear wheels.

The electric motor has been developed in-house by the McLaren Electronics arm. It is unique to the McLaren P1 and benefits the car in many ways. One such example is the shift times. The electronic motor in the P1 produces negative torque at the point of shift which allows for faster, almost seamless shifts. The McLaren P1 can survive on pure electric power for up to 20km at 30mph.

The tyres fitted to the McLaren P1 are specially developed Pirelli P Zero Corsas. You’ll also notice from the photos that the McLaren P1 features a revolutionary ceramic brake design. Designed by McLaren’s Formula 1 partner Akebono, They have a mirrored finish but we are told they are more fade resistant and dissipate heat better than any other brake design. They have even seen service in space! It is the first time they will be fitted to a road car.

Now that we have all the details, we can’t wait to see the McLaren P1 at the Geneva Motor Show 2013. Check back next Tuesday for a full no-details spared gallery! 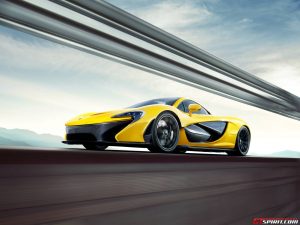 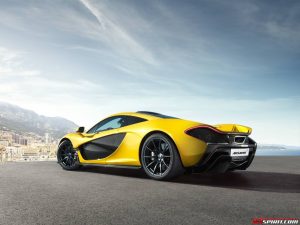 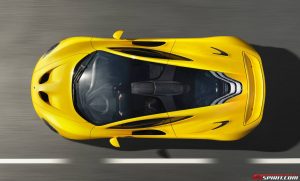 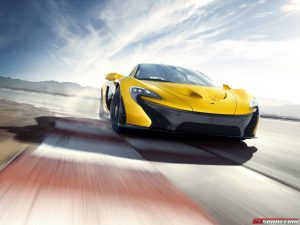 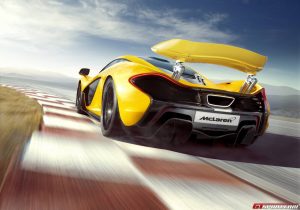 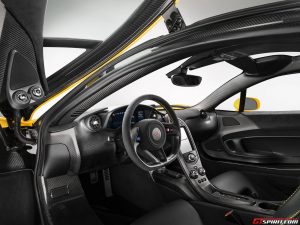 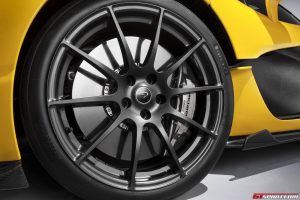