Mercedes’ replacement for the CL caught undergoing testing; expected to be revealed at the 2014 Geneva motor show,

The new model will form part of a five-strong line-up for the new S-classand rival the Bentley Continental GT.

Mercedes is aiming for a sleeker, more muscular appearance for the S-class Coupé, eschewing the two-door saloon style of the CL it replaces.

Latest spy shots show the S-class with a narrow glasshouse and a dramatic swage line that runs from the front wing to the rear wheelarch.

The rear of the S-class Coupé features LED lights and a unique design that appears, in disguised form, unrelated to any other Mercedes models, including the new S-class saloon.

A gentle sloping of the rear windscreen implies rear seat accommodation will remain a priority for the two-door car. Prominent exhaust pipes also hint at the more sporting intent of the coupé.

The S-class saloon will receive its official unveiling next week. Further additions to the line-up will include a cabriolet based on the Ocean Drive concept and an extra-long-wheelbase version under the ‘Pullman’ name.

Mercedes-Benz’s new coupé is expected to arrive in 2015, following a debut at next year’s Geneva motor show. 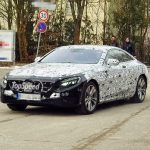 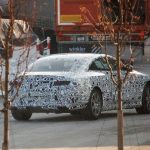 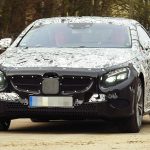