Citroen debuted the Technospace concept at the recently concluded Geneva Auto Show though only now has the company confirmed that the concept will indeed be put into production in next year. The C4 Picasso minivan has already been spied being put through the tests in Europe and reports have suggested that the vehicle will retain a large part of its concept stage style when it does enter production. The dimensions of the 1610mm tall an 4.43m long Technospace concept are likely to remain unchanged for the Picasso and the big tailgate, tapering roofline front door frame, corner window between the A-pillar, headlight design and split DRL would also be seen as part of the styling set for the new model. 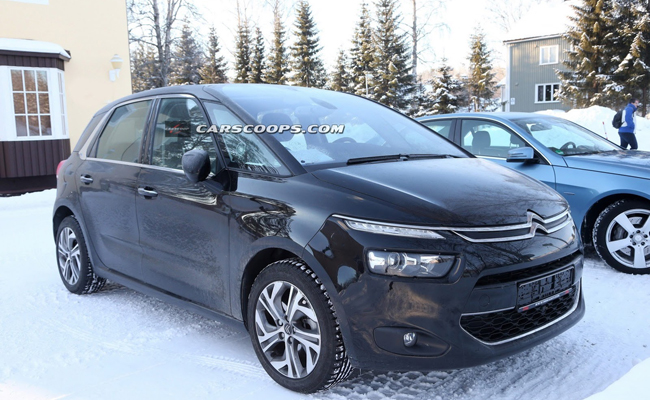 The upcoming 2014 Citroen C4 Picasso was seen as a completely undisguised prototype in these spy shots which also reveals that the new model’s cabin boasts of a second screen above the dash as well as a sleek centre display arrangement that highlights the uncluttered dash design. With all seats upright, the new model would boast of a storage capacity of around 537 liters. The new model is around 70kg lighter that the current generation of the Picasso and it is also a lot different than the outgoing model.

Made using composites, high-strength steel and aluminum developed by PSA Peugeot Citroen, the new vehicle uses the Efficient Modular Platform 2 (EMP2 platform). The entire specs sheet and details for the production model are yet to be revealed though ewe do suspect that a range of diesel and gasoline engines will be offered in the entire range for the compact minivan. Price and availability too are to be released at a later date though we can confirm that the model is surely headed into production soon.