YouTube user Cody Griffin has revealed a video interview between Valentino Balboni and Richard Geremia, general manager of Herb Chambers Lamborghini/Bentley/Rolls-Royce. In this video, the last model of the Lamborghini Gallardo is featured and Balboni gets to say more about this model, it also has the start-ups and revs. 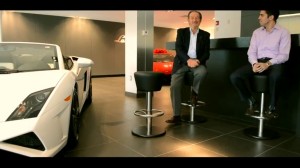