The Mercedes-Benz Unimog, the superhero villain of the off-road world that’s just waiting to make the jump to Transformer, has been completely upgraded for its new generation. There are ten models, expanding the range and getting new designations across the traditional all-terrain series and the implement-carrier series. Panoramic cabins get more visibility, multifunction steering wheels and better dash clusters, improved HVAC and a three-mode central tire inflation system. Outside, there are new items like LED headlights and daytime running lamps in the bumper, roof-mounted windshield wipers and a front-camera monitor for the implement carrier.

The new engine lineup is compliant with Euro VI, featuring four- and six-cylinder BlueEfficiency engines putting out anywhere from 156 horsepower to 354 hp. Powerplant placement has also been tweaked, the chassis members getting a revised curve to place the engine a bit further back and lower, maintaining off-road clearance and lowering the Unimog’s center of gravity. The new location of the engine means the cabin has more room, and the wheelbase is shorter. Combined with a higher turning angle, the Unimog has a smaller turning radius than before.

The implement carrier gets what’s called a “synergistic traveling drive,” the bonus being that drivers don’t need to stop in order to use an attachment – a hydrostatic transmission works with the regular manual transmission at up to 31 kilometers per hour for seamless switching.

Those are just a tiny number of the changes in the new monsters from Mercedes-Benz. You can find out enough about them in the two videos and three press releases below to become a certified dealer. 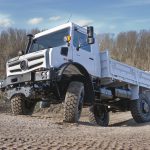 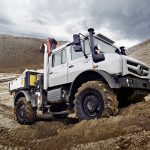 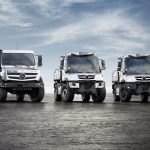