We aren’t expecting to see the next-generation Mercedes-Benz C-Class until the 2014 Detroit Auto Show next January, but our quick-snapping spy shooters managed to catch a prototype being pulled out from under the covers. In these shots, we can clearly see that the new C-Class will take many of its design cues from the larger E- and S-Class sedans – something that’s especially noticeable with the more vertical taillamps.

When Mercedes-Benz launches the new C-Class next year, it will reportedly come with a range of gasoline, diesel and hybrid powerplants, as well as a couple of different bodystyles (at least sedan and coupe, anyway). Of course, Mercedes-Benz will need to reposition the C-Class in its lineup, since this small sedan will no longer be the entry point to the brand, what with the fresh new CLA-Class hitting our market later this year.

Still, there should be a lot to like about the upcoming C-Class, and folks from Mercedes-Benz are eager to get this thing on the road. In an earlier Automotive News report, the company’s US CEO, Steve Cannon, admitted that, “We were fighting the 3 Series with two arms tied behind our back, and now we will change that.” 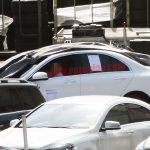 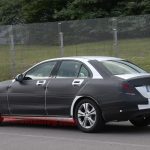 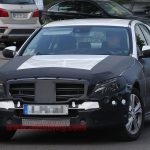