An NYPD cop was chasing an unregistered dirt bike rider through the Bronx when a friend jumped on the back of the motorcycle. The cop car then crashed into the bike, injuring one rider and killing the other. Now there’s video of the NYPD actions.

Fox 5 News reports that the crash occurred in August 2012, when the police were chasing 28-year-old Eddie Fernandez on an unlicensed dirt bike without a helmet. Fernandez’s friend Adalberto Gonzalez jumped onto the back of the motorcycle and just as they took off, the police car crashed into them.

As you can see in the video (Warning: It’s semi-graphic) Fernandez suffered fatal injuries in the crash and Gonzalez had to undergo surgery on his foot. Gonzalez faces charges of reckless endangerment, resisting arrest and reckless driving. Now, however, Gonzalez is suing the NYPD.

Gonzalez will go in front of a judge again this week, though the Bronx District Attorney has already declined to prosecute the officer behind the wheel.

The swarms of unregistered dirt bike riders in New York City are clearly both dangerous and unsafe (certainly when they are running from the police without a helmet), but no one wants to see cops running people over to death. 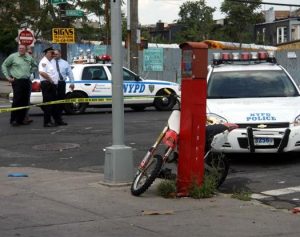