Yesterday a rare oldtimer got heavily damaged in an accident. According to local news the employee of a garage lost control over a Mercedes 300 SL Gullwing near Pleidelsheim in Baden-Württemberg/Germany.

Exiting a left turn the car left the road and subsequently rolled, assumed cause by the police is speeding. The driver of the car, a 26 year old man, was not harmed in the accident.

First estimates indicate a damage of about 650,000 euros (around $830,000) on the car. Its owner had it at the garage for services to be done. His reaction to the bad news is unknown. 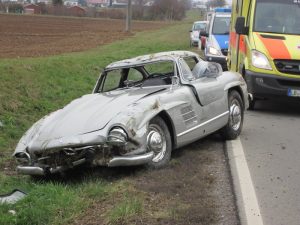 Speedlimit on that part of the road is 80kph (50mph). Also there was a 19 year old apprentice in the passenger seat who also was not harmed in the crash. Also the owner apparently was calm when he was called and told what happened. The police also stated that the whole incident is (as expected) covered by the garages insurance as well as by the cars insurance.

The bigger damage seems to be the mental one, as the owner, a local businessman, used to take the car on oldtimer-rallyes where the handling in fast corners was never an issue.