The Rolls Royce Ghost was officially unveiled at the 2009 Frankfurt Motor Show and since then, it received no major updates. However, it looks like parent company, BMW, has decided it is time for a small update. And when we say “small,” we really mean it.

As you can see, this prototype is wearing little camouflage and what it is wearing it only on the parts that are going to be updated. Expect to see new headlamps and a revised front bumper with a design inspired by the recently revealed Wraith. The exterior mirrors also seem to have received a new shape. On the rear, the exhaust tailpipes are now hidden, giving it a cleaner look.

For the interior, Rolls Royce Ghost will offer an updated sat-nav and infotainment system.

We expect some smaller changes under the hood too, most likely in order to obtain more power and less CO2 emissions. 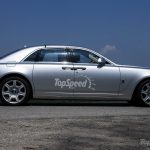 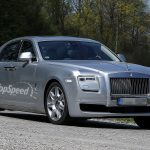 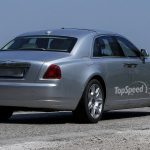