The 2013 Ford Taurus SHO is a sneaky-powerful car. It doesn’t carry much publicity as one because it’s overshadowed the Mustang. But as far as power, the Taurus SHO packs quite a punch.

Recently, U.S. tuner Hennessey took possession of a Ford Taurus SHO and at the behest of its owner, proceeded to give it a performance program that’s worthy of applause.

Thanks to the installation of a stainless-steel cat-back exhaust system and a dual cold-air induction system to go with an ECU remap, Hennessey was able to increase the high-powered sedan’s output to a stout 445 horsepower. With that improvement, the Taurus SHO is now capable of hitting 60 mph in just 4.3 seconds, and sprint the quarter-mile in only 12.8 seconds at 109 mph. No details were given on the top speed but we won’t be surprised the least bit if this Taurus SHO can peak at around 160 mph.

Oh, and in case you’re wondering if the modifications ended there, they don’t. That’s because Hennessey also gifted the Taurus SHO with a serialized dash, engine plaques, “445 Boost” and “Hennessey” badges, and embroidered headrests.

Hennessey didn’t say how much the program cost, but it did say that the kit comes with a one-year/12,000-mile limited warranty. And boy, did it return with a bang. Take the car’s engine – a 3.5-liter EcoBoost V-6 engine that produces 365 horsepower and 350 pound-feet of torque – aside for one second and focus on the look of the Taurus SHO. 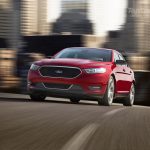 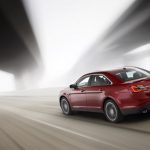 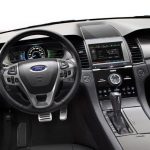