With falling sales and stiff competition from the BMW 7-Series and the Audi A8, Mercedes is looking to revamp its S-Class line for 2014. Recent spy shots have revealed a sightly longer model with the hood and the wheelbase getting additional length. All new LED daytime running lights and indicators have also been spotted and appear at the top of the headlights as opposed to the side. Expect the new S-Class to get styling cues from the 2010 Mercedes F800 Style Concept which would mean sharper lines and possibly, a new front radiator grille.

Mercedes’ Head of Research and Development, Dr. Thomas Weber, has previously revealed that the new S-Class will also feature a plug-in variant modeled after the 2010 Vision S500 Plug-In Hybrid Concept. This would mean that the new hybrid would be powered by a powerful direct injected V6 engine and a 60 horsepower electric hybrid module run on a next generation lithium ion battery pack. The Vision S500 was able to translate this setup into a 0 to 60 mph sprint time of 5.5 seconds and an electronically limited top speed of 155 mph, all while achieving 74 mpg! 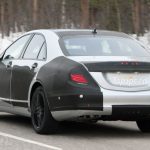 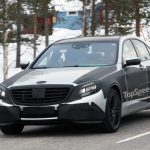 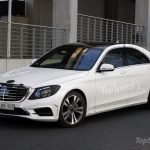 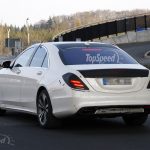 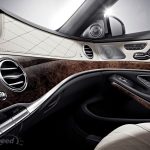 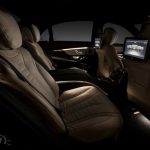