In conjunction with the next-generation X5, BMW is also working on the M version of the SUV. The model has been caught testing for the first time doing some quick and loud laps around the Nürburgring race track.

Although the SUV is still fully camouflaged, there are some distinctive M elements that confirm this is the future X5 M. These special elements include the quad M exhausts, the active differential, and blue brake calipers, which have become the signature color for M model brakes. Behind the M brakes, there are drilled rotors which are being used for the first on any X5 model.

At the front of the car, there are huge air intakes and a path that connects the headlights to the kidney grilles, a feature found on the F30 3 Series.

Under the hood, there will be the same engine that can also be found in the M5: a twin-turbo V-8 delivering some 560 horsepower. 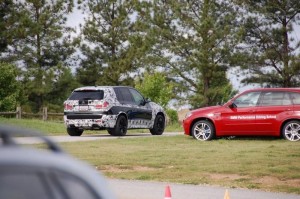