“The Beetle is now characterized by a clean, self-confident and dominant sportiness. The car not only has a lower profile; it is also substantially wider, the front bonnet is longer, the front windscreen is shifted further back and has a much steeper incline. All of this creates a new dynamism,” explains Klaus Bischoff.

Volkswagen has been talking about the new Beetle’s design for quite some time now and they say it will take its inspiration from the original Beetle that debuted 73 years ago. No one in their right mind will think this is anything but a Beetle, but the changes in the reliable “Beetle format” are easily distinguished. The new Beetle is bolder, more dynamic, and more masculine, with the latter being a huge bonus for this generation of the car. Many men wouldn’t be caught dead in the bug-like vehicle in previous years, but we’re sure Volkswagen is hoping this stretched out design will open doors into the male segment. Looking at the new Beetle, you’ll notice the new design line from the front bumper and front air inlet, the straight lines of the bonnet edges, the precisely drawn line between the A-pillar and C-pillar, and the styling of the rear lights, all assisting in the new generation’s transformation into a new world.

A first for the Beetle models are the new bi-xenon headlights: 15 LEDs frame the xenon module on the outer perimeters of the headlights.

Starting with 2013 models built in May 2013 and later, the Beetle Turbo will include R-Line bumpers as standard equipment. These new bumpers feature grained black surfaces and chrome-frame signals up front and the rear bumpers features a diffuser.

The 2012 Volkswagen Beetle will go on sale this October with prices starting from $19,765 – about $500 cheaper than the model it replaces. It’s also worth noting that the New Beetle’s price is cheaper than one of its main rivals, the MINI Cooper and it’s MSRP of $20,100. 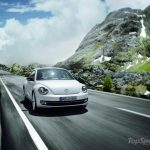 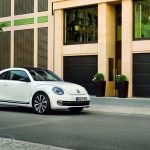 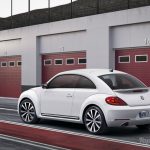