The Fiat 500 lineup has been expanding ever since inception, now offering a convertible, sport-tuned Abarth version, and the new-for-2013 500 Turbo that looks to blend the best aspects of both the standard car and the hot hatch. For those who want something faster than a regular Fiat 500, but who don’t want to spend the $22,000 (base price) for the Abarth, the Fiat 500 Turbo looks to offer the best of both a hot hatch and a commuter friendly subcompact.

Upgrade to the 500 Turbo and Fiat tacks on low front fenders, 16-inch aluminum wheels complete with red brake calipers, blacked out headlights with black bezels and a spoiler that come together to give the 500 Turbo an edgier look compared to the bubbly, happy-go-lucky Fiat 500 design.

The slight upgrades succeed in giving off the impression that the 500T is meant for more than just highway driving and city living, and give the car an edge that takes it out of the “girl car” realm into which it’s often pigeonholed. Besides the aggressive bolt-ons, there are no particular badges that indicate that this 500 is anything more than a regular 500, adding to its under-the-radar appeal. That said, it’s not likely to get you noticed, save perhaps the enticing exhaust note.

Spitting out the back of the little 500T is an exhaust note more akin to a sports car than a European runabout; it is one of the pure pleasures found on the 500 Turbo. Keeping a smile from your face when you hear the engine start up is hard to resist, as it burbles, spits and hisses, giving a sports-performance aura more than any low fenders or spoiler ever could. 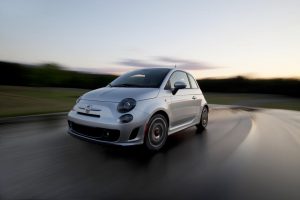 Power is delivered by the same 1.4-liter MultiAir Turbo that moves the Abarth, though in this turbo form it is downgraded by 25 hp and 20 lb-ft of torque, making a total 135 hp and 150 lb-ft. Between the Turbo and the Abarth exists a difference of $2,500, which gets you a little power bump, and not much else.

The 500T offers the best parts of the Abarth, and leaves little to be desired. A performance tuned suspension lifted from the Italian pocket rocket delivers a stiff ride, sometimes uncomfortable, but a tremendously fun experience when thrown into a corner. The car grips and sticks, and occasionally suffers from a bit of understeer. As power goes to the front wheels, torque steer is present, but not in any damning way.

The power increase, which includes a 50 percent improvement in torque compared to the base 500, is much appreciated. Not just a car for fans of performance, it’s an all-around better package – one that you won’t struggle to get up to highway speed with and don’t have to constantly drive to redline.

Still, it can be a bit of a slouch at low rpm, and even in first gear. Toss the shifter into second and hit around 3000 rpm however, and the torque is released making the little Italian buggy scurry like a jackrabbit.

The steering wheel weight is nicely balanced, airing on the lighter side but still giving enough feedback to respond to the car’s needs. The brakes, the same upgraded ones from the Abarth, stop with authority.

The shifter itself does offer some difficulty. It is long, somewhat awkward, and feels as though a worker on the factory line forget to tighten a few screws. The gates are not the easiest to find the first couple times you take the 500T for a spin, and are spaced much farther apart than one would expect when jumping into a car meant to be driven quick.

Adding to the awkwardness of the shifter is the rather long bite point of the clutch. It can still be engaged quickly, but the combination of the shifter and clutch leave you with the feeling this car was not designed for speed.

Leather and red-accent stitching cover the rather long shift knob, at least making it easy to grip and offering a good tactile feeling in hand; same goes for the steering wheel.

UPRIGHT, BUT NOT UPTIGHT

Inside, the seating position offered is high up and upright, but thanks to the bubble-inspired roof, allows for individuals 6-foot and up ample headroom, though driver side legroom is intruded upon by the shifter housing. Because it is mounted at the lowest part of the center stack, a large protruding plastic housing for the shifter sits exactly where us taller folk would like to rest there knee, leaving only an edge that can become uncomfortable over time.

The entertainment system is straightforward and responsive, something that has come to be expected from Chrysler. The 500T is also equipped with a Beats by Dre 368-watt audio system, which delivers clear music with an incredible depth and space for each frequency to breathe. As a music lover, I would opt for the upgraded system, though many who are only looking for a sporty ride may be stuck with an extra price premium, for something that is not a priority. And besides, that exhaust note is a capable solo artist.

Control-wise, the only seemingly out of place switch is for the power-window controls, which are located in the center of the car rather than on the doors themselves. The front mounted steering wheels controls also deserve a special mention, for being very ergonomic, and incorporated well into the design of the wheel itself.

Overall, it’s another example of how Fiat is killing the competition when it comes to interior design and materials. 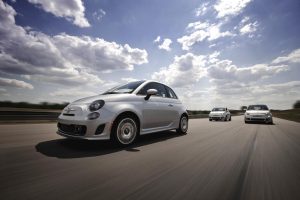 Driving the 500 Turbo for a week in mixed conditions returned a fuel economy average of 28 mpg, which meets the car’s EPA estimated city fuel economy number, though is short of the 31 mpg average claimed.

With an official rating of 28 mpg cit and 34 mpg highway, its well short of the 31/40 mpg rating of the non-turbo 500 and actually matches the rating of the more powerful Abarth.

Still, considering our week of not-so-slow driving, we’re impressed. Achieving solid fuel economy and having fun doing it is becoming the industry’s benchmark, though few have achieved it yet as well as Fiat has with the 500 Turbo.

So with legitimate sporting credentials and a relatively low running cost, what the 500T comes down to is price.

The Abarth may be quicker off the line, but few would say that the Turbo model is an exceptionally different car. And because of that, the 500T is absolutely the car to get in the range, doing well at combining the best of two different automotive segments that rarely meet: efficient commuter cars and fun-to-drive cars