After setting the record in 2007, six years on the SSC Ultimate Aero has reclaimed the title of world’s fastest production car.
Earlier this week, Guinness World Records officially stripped the Bugatti Veyron Super Sport of its “world’s fastest” production car title. After holding the title for three years, Guinness suddenly realized the record-breaking Veyron had been modified in order to reach a speed of 267.8 mph. Its speed restrictor, which limits each of its 30 customer cars to 258 mph, was deactivated for the run, which is a clear violation of Guinness rules. It was subsequently assumed the crown would pass to the Hennessey Venom GT that recently posted a 265.7 mph top speed. However, as this has yet to be ratified by Guinness the crown of world’s quickest production car has been reclaimed by the SSC Ultimate Aero, who established an average speed of 256.14 mph on a public highway in Washington back in 2007. According to SSC founder Jerod Shelby, holding the top speed record comes with a stigma as it can stop people recognizing the supercar’s other engineering feats such as handling and braking. So with its upcoming model, he says “SSC has its sights set on the one-lap record atNurburgring to showcase the engineering prowess of the SSC Tuatara.” We look forward to seeing that. 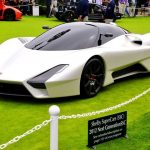 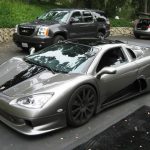 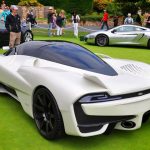