The new-generation Porsche 911 GT3 made its official debut at the 2013 Geneva Motor Show, but there is still plenty of time before the new sports car hits showrooms, leaving plenty of time for some extreme testing.

These past few days, Porsche has taken advantage of this time by bringing a new GT3 prototype to the Nürburgring Nordschleife for some hard testing sessions. All we can say is that the 3.8-liter boxer engine found under the hood sounds like music to our ears! Watch the video (above) if you don’t believe us!

The new 911 GT3 delivers a total of 475 horsepower, which is enough to sprint to 60 mph in just 3.3 seconds and up to a top speed of 195 mph. The problem is that Porsche decided to only offer a PDK gearbox, with no manual alternative being offered for those with a true driving spirit.

According to reports, the new 911 GT3 ran the Nürburgring Nordschleife in under 7:30 minutes. 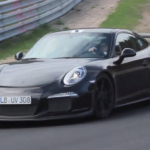