If you like red BMW coupes, do we have a gem for you today. Our spy photographer managed to nab the upcoming M235i coupe during a photo shoot completely camo-free

The M235i will be the replacement for the current 135i and 135is in BMW’s lineup. Based off of the rear-wheel-drive, F20-generation 1 Series hatchback that debuted in Europe last year, the M235i will sit atop the 2-Series range in the U.S. It’s expected that the M235i will be powered by the same turbocharged N55 3.0-liter I-6 as the current car; our sources tell us that the 2015 model should have be rated between 315 and 320 hp. Buyers looking for less power and more efficiency will be able to pick up the 228i that will share its N20 2.0-liter turbo-four with the 320i and 328i. Transmission options for both versions are expected to be a six-speed manual or an eight-speed automatic.

Dressed in Melbourne red, this M235i that we caught blends the current 1 Series coupe’s design with numerous cues from the F20 1 Series and upcoming 4 Series coupe. In profile, the new 2 Series wears a similar greenhouse to the current 1 Series coupe, albeit longer and slightly more sculpted. The front end has gaping intakes with detailing reminiscent of other M-spec cars, more upright kidney grilles, and squinting headlights like the 4er’s. Interestingly, unlike the 3 and 4 Series, the 2 Series’ headlights do not extend all the way to the grille surrounds, although they do have a similar shape to the lights on the 3/4er. The rump is covered in some black plastic, but we can clearly make out dual exhaust outlets, a trunk spoiler, and a grey diffuser. We can also see the new taillights – they have similar graphics to the 1 Series hatchback’s, but are more rectangular than square. Telltale signs that this is, in fact, the M235i include M-Sport-style five-spoke wheels, blue-painted brake calipers, silver mirror caps, and what look to be M badges on the front quarter panels.

The 2015 BMW M235i’s official debut is expected toward the end of the year, with sales commencing in the beginning of 2014. 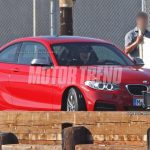 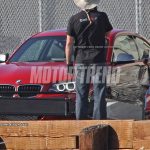 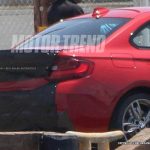