he fabled Nordschleife, the treacherous layout alongside the modern Nurburgring formula one circuit, had to be closed for a time on Sunday.

Austria’s APA news agency reports that graffiti artists painted a giant 15 by 4-metre all-white penis on the asphalt of the famous layout.

Circuit authorities deployed specialised cleaning vehicles to remove the graffiti, and local police confirmed that the facility had to be closed for 90 minutes.

The police estimate that the graffiti involved about 20 litres of white paint, posing a low-grip safety hazard for those lapping the Nurburgring. 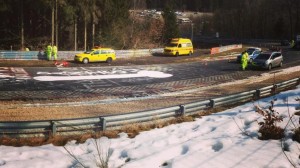