Police academy recruiters in the Gulf emirate of Dubai just had their jobs made a whole lot easier.
If nothing else, Dubai is known as a city with plenty of money floating around and cheap gasoline. That marriage made in the desert equates to an abundance of highly-expensive, super-fast cars whose owners often find hard to drive within the speed limit. Enter the Dubai Police Department, which has become the first police force to add a Lamborghini Aventadorto its patrol fleet – even if this isn’t the first time we’ve seen cops using supercars to patrol the streets. taly’s Polizia have a Lamborghini Gallardo LP560-4, the Japanese police use a Nissan Skyline GT-R for hot pursuits, the Germans have an ABT-tuned Audi R8, and in Colombia the local constabulary chases down drug dealers in a Ferrari 348 TS. Sporting the numberplate “8,” the green-and-whiteAventador is to be the first of a selection of police-designed sports cars to be introduced into the Dubai police force’s fleet in order to patrol the highways. With a 0-62 mph time of three seconds and a top speed of 217 mph, the 700hp Lambo should be a match for most things on the road. Or, at least it would be in any other place in the world. 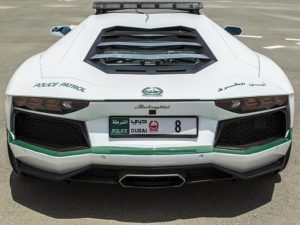