News just in from Paramount Pictures – the Bugatti Veyron Grand Sport Vitesse has been added to the fleet of autobots. The fourth installation of the Transformers movie has started production on location in Monument Valley in the Navajo Nation near the border of Arizona and Utah.

The photos which were firstly shown on Yahoo indicate that apart from the Vitesse, the new Chevrolet Corvette Stingray C7 will also join the fleet. The C7 is shown in a bright green color, all the photos were taken from the shooting location named above.

As for now, not much is known about the new movie, but director Michael Bay has replaced Shia LaBeouf with Mark Wahlberg. The film is expected to depart from the feel of the previous films, with a darker story.

The World Record Edition has been proven to reach speeds of 408.84 km/h or 254.04 mph making it the fastest road legal convertible production vehicle in the world. The one to be used in the movie will feature a French Racing Blue theme. Wondering where Bugatti got the French Racing Blue idea from?

Moving on, the Chevrolet Corvette Stingray replaces the outgoing C6, it made its debut at the Detroit Motor Show 2013. The C7 Chevrolet Corvette Stingray has 450hp from its new generation LT1 GM V8 engine. As a result, the new car surpasses the previous generation base C6 substantially in every performance aspect and is able to launch to 100km/h in under four seconds. 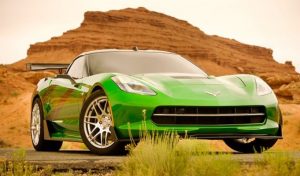