It’s been a while since welast caught the upcoming BMW M4 Coupe testing, but it’s definitely worth the wait. Today, spy photographers managed to catch the car testing at the famed Nürburgring racetrack in some slippery conditions. This may seem insignificant on the surface, but it is a sign that BMW has reached the next level of testing and that an official unveiling is drawing near. BMW also tipped its hand by equipping this particular model with a set of gold-colored calipers, which indicates that this 4 Series features the M Carbon Ceramic brakes.

As for the engine, rumors indicate that the M4 will be powered by a S55 3.0-liter in-line six-cylinder engine with an output of 415 horsepower. Just like with any other BMW M model, the future M4 Coupe will be distinguished by a more aggressive exterior look. Up front, BMW will install the usual aerodynamically optimized rear apron with a diffuser slotted between the familiar M quad tailpipes. 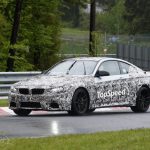 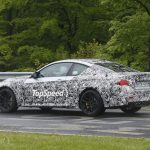 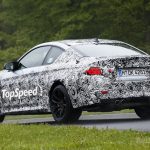