Say hello to the most badass jet powered school bus which is a vehicle with a mission. . Well,better make that two missions. “The first is to entertain people because, come on, it’s a jet bus,” Says Paul Stender “The second is to inspire kids to keep away from drugs.”Paul Stender is the ‘’American hero’’ who built this 367mph jet schools bus powered from a GE J-79 jet engine that produces 42,000horsepower and specifically built for an F-4 Phantom fighter jet. 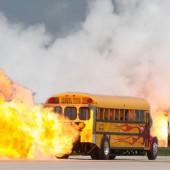