The Audi RS7 is maybe one Audi model that doesn’t need any upgrades. It features a muscular 4.0-liter, twin-turbocharged V-8 that delivers 560 horsepower between 5,700 and 6,600 rpm, and 516 pound-feet of torque between 1,750 and 5,500 rpm, which is rather powerful for its class and enough to launch it to 60 mph in a supercar -like 3.7 seconds. But ABT Sportsline has introduced a new tuning program for the Audi RS7.
ABT Sportsline is well known for pushing Audis to their limits, and it decided the RS7 is ripe for a boost in power. So. it came up with a kit for the four-door coupe that includes an ABT Engine Control combined with a new exhaust system with “New Generation” Power S.
These changes bump the mighty 4.0-liter V-8 to either 666 horsepower and 612 pound-feet of torque or 700 horsepower and 649 pound-feet of torque, depending on the level you choose. The most powerful version can hit a top speed of 198 mph, and we estimate the 0-to-60 mph time to be around 3.5 seconds.. 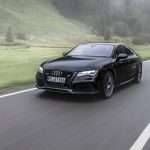 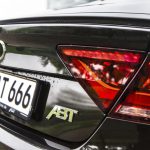 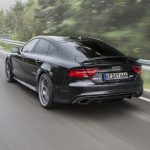