Mitsubishi is holding on to the saving grace of its lineup, the Lancer Evolution. This four-door all-terrain rocket has arrived for the 2014 model year with minor updates and some new pricing.

New amenities include a 6.1-inch touchscreen display, HD radio, SiriusXM with a 3-month subscription, and an available 7-inch touchscreen with real-time traffic updates and 3D terrain mapping. Some nice options to be sure, but most Mitsubishi fans are eagerly awaiting the arrival of the next-generation machine.

Options include a $2,150 Touring pack that adds niceties such as leather trim, heated seats, a powered sunroof and rain-sensing wipers. Then there’s the $2,000 Sight & Sound, which adds HID headlights, a Rockford Fosgate Punch premium sound system and Fast Key Entry System. Premium paint will add $250 to the car’s sticker.

Both cars come powered by a 291-horsepower turbocharged four-banger that also cranks out 300 pound-feet of torque. All of that power is routed out to each corner by way of the Super All-Wheel-Control all-wheel-drive system.

For around $40,000 you’re getting a car that is a truly potent performing machine. It’s a wonderful car paired with a mediocre interior, minus the Recaro seats and, we’re assuming, the new touchscreen. The Evo is in desperate need of a refresh, and rumor has it that the next Evo could arrive in GT-R fighting trim packing 500 horsepower. We can only hope that’s the case because we probably won’t hear anything for another year. 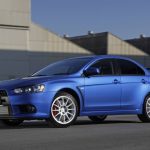 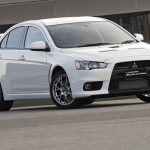 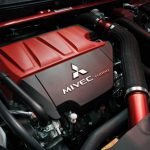