Every year, German automaker Volkswagen goes to the Wörthersee festival in Reifnitz, Austria to show us a concept that blows us away.

It’s no different this year because after much hype and buzz, VW is ready to unleash the Design Vision GTI Concept.

We can go on and on about what we think of the concept, but that space is provided after the jump. Here, it’s all about trying not to trip over ourselves in throwing as many superlatives as our brains can come up with.

In any case, Volkswagen designed the concept as a way to show us what the future of its GTI line could look like. It didn’t say that a production version of this car is on the horizon, which is a bummer, but if this does give us a hint of what we can expect for future GTI models, then Volkswagen did a masterful job of getting our attention. 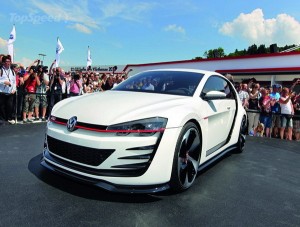 A couple of things stand out just by looking at the Design Vision GTI. First, it looks a little smaller than the standard GTI and that’s backed up its dimensions, which you can see below. But more importantly, the concept has some pretty radical styling that should bode well for the future of the GTI line, in the event Volkswagen uses the concept for future design language.

The car’s C-pillar, in particular, looks like it was designed to evoke a future styling element. It’s pulled away from the body and appears to seamlessly flow into the aggressive-looking rear fenders. The front end also speaks to the car’s aggressive design, especially the way Volkswagen was able to combine multiple elements – the radiator grille, the bottom air inlet, the brake cooling, the headlights, the front fenders, and the hood – to make them flow effortlessly together, creating a futuristic design that potentially underscores the future of the GTI line.

If there’s one thing that Volkswagen kept close to the production model, it’s the color choice. Using the traditional “black-white-red” combination, Volkswagen designed the Design Vision GTI to predominantly carry the White Club finish and integrated with a piano paint black and red finishes. 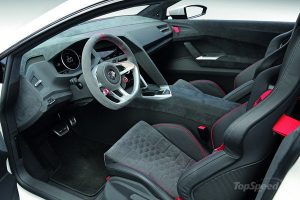 When the head of the company’s interior design division wants you to design a cabin for the DesignVision GTI that’s “Pure GTI” while also “concentrating on the truly essential, but with style”, you might want to follow his heed. So, Volkswagen designers did just that; they created a cabin that while far from the ordinary, also exudes a subtlety about it that made for a pretty ergonomic cabin.

The steering wheel, for one, was equipped with ergonomically optimized DSG paddle shifters, while the use of carbon fiber on the interior provides a racecar edge to the cabin. Speaking of using some unique materials, the interior of the concept also features “Black” and “Flash Red” Nappa leather, “Anthracite,” and “Titan Black” Alcantara. From there, you can take a good look at the dashboard and the center console, which appears to be more driver-oriented, as shown by the flat surfaces and sharper edges. The latter, in particular, also houses the car’s control panel, which includes switches and turn knobs for climate control, the hazard light switch and the activation for the on-board camera with the electrical kill switch, a push-button for the fire extinguisher and the ESP deactivation located just underneath.

And finally, a large display is installed to show some important information when you’re driving the car in a track. Whether it’s the track map or the lap times, all the pertinent details are in it to ensure that you know what’s going on in your surroundings while you’re blasting along the race track. 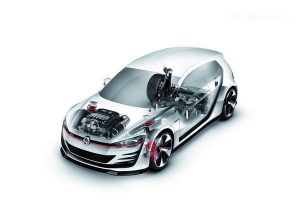 Under its hood, the Design Vision GTI Concept comes packed with a 3.0-liter turbocharged V-6 engine that produces an impressive 503 horsepower at 6,500 rpm and as much as 413 pound-feet of torque at 4,000 rpm while mated to a DSG dual-clutch automatic transmission and an all-wheel-drive system. Those performance figures allow the car to hit 0-to-10 km/h (62 mph) in just 3.9 seconds with a top speed of 186 mph. 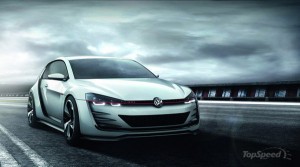